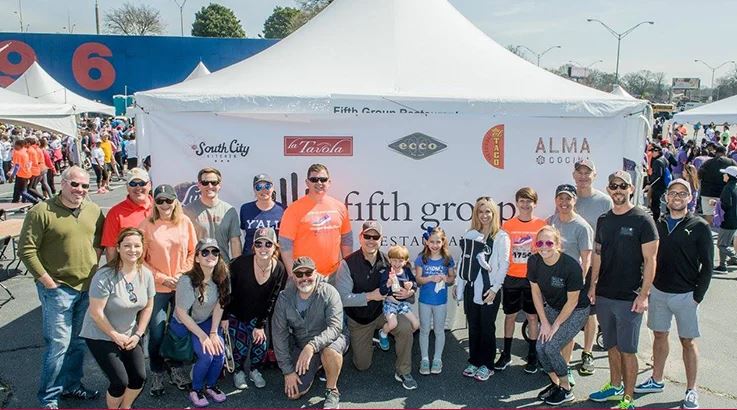 Fifth Group Restaurants raised $124,506 for the 36th annual Hunger Walk Run despite its cancellation. Proceeds from the walk and run benefit the Atlanta Community Food Bank and other local nonprofit organizations that support food pantries, community kitchens, shelters and other programs for people in need of food assistance. Fifth Group’s six-figure donation is the highest amount the company has raised over the past 12 years of participating.

The Hunger Walk Run was supposed to have taken place on March 15, 2020 but was cancelled due to the coronavirus pandemic. Despite the cancellation, Fifth Group was able to make the contribution from fundraising efforts that took place in February and March. Each restaurant encouraged guests to donate following their meals, and anyone was able to contribute to the Fifth Group team on the Hunger Walk Run website. Fifth Group leadership and restaurant team members made personal donations in excess of $17,000.

Fifth Group began its corporate support of the Hunger Walk Run in 2008 and, in conjunction with the Food Bank, spearheaded the event’s Restaurant Program, encouraging Atlanta’s hospitality community to join the fundraising and awareness efforts. Since beginning its relationship with the Hunger Walk Run, the restaurant group has now raised more than $725,000 for the cause, resulting in nearly 2.9 million meals. The money raised by the hospitality group in 2020 alone will provide approximately 500,000 meals for families in Georgia. Fifth Group continues to be named the event’s largest corporate donor, ahead of an impressive group of corporate participants, which include some of the city’s largest and most notable companies.

The Hunger Walk Run is the Atlanta Community Food Bank’s largest fundraiser, aiming to raise awareness around local food insecurity and raise critical dollars for hunger relief. It benefits organizations that operate and support hundreds of food pantries, shelters, community kitchens, senior centers and child care centers across metro Atlanta and north Georgia. Participants and donors are empowered to support the charity of their choice, thus tailoring giving to specific interests while contributing to broader, community-wide hunger relief efforts. Funds from this year’s Hunger Walk Run will also support the Atlanta Community Food Bank’s efforts to provide food assistance amid the coronavirus pandemic through special mobile distributions, partnering with schools to feed families in need and other timely initiatives. Read more about the Atlanta Community Food Bank’s response to the crisis at http://acfb.org/covid-19-response.