The DOL 80/20 Tip Rule Revision: What Employers Should Know 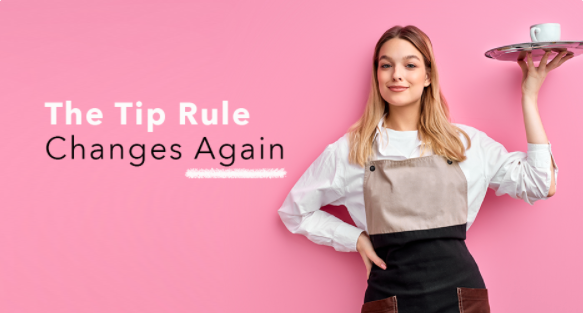 You might have heard about the DOL 80/20 revisions that are due to come into effect on December 28, and you might think it’s nothing to worry about. But don’t get too comfortable! These revisions will affect restaurants and service establishments everywhere that have tipped employees on staff. So, if your restaurant falls into this category, keep reading. There are several important changes to the DOL 80/20 tip rule that you will need to understand. But first…

The 80/20 tip rule is a rule from the Department of Labor that requires employers with tipped employees to pay minimum wage instead of the lower tip credit wage for any time their workers spend 1) performing duties that are not tip-generating or tasks that are unrelated to their tip-generating duties and 2) that surpass 20% of their overall time for the week or that are done continually for more than 30 minutes.

The 80/20 tip rule is not a new rule. It was first introduced into the DOL Field Operations Handbook (FOH) back in 1988, and was developed out of policies established in the 1979, 1980, and 1985 Opinion Letters in regard to when employers could take tip credit. In 2018, the rule was rescinded to issue new sub-regulatory guidance allowing employers to take the tip credit when their employees performed non-tipped duties. Later, the DOL published the 2020 tip final rule. They then extended the effective date to April 30, and later to December so that the DOL could have time to reconsider the 80/20 ruling.

On December 28, the revisions to the Fair Labor Standard Act (FLSA) will come into effect. The purpose of the final rule is to provide clarity and flexibility to employers for the variable situations that can come up for tipped occupations. It also aims to protect tipped workers who are essential to business and often easily subject to abuse by employers who (consciously or unconsciously) may take advantage of their low wage. (For example, sending the dishwasher home early and having the tipped employee finish the cleanup.)

Currently, seven states do not permit employers to claim this tax credit.

To better understand the DOL 80/20 tip rule, it’s important to understand that the FLSA requires employers to pay a minimum wage of $7.25 an hour.

Employers can satisfy a portion of the minimum wage obligation to any employee that falls under the definition of a “tipped employee” and take a partial credit called “tip credit,” so long as the employer meets the requirement of paying the worker at least $2.13.

For an employee to be considered a “tipped employee,” they must be engaged in an occupation in which they customarily and regularly receive more than $30 a month in tips. Some examples include waiters, bellhops, waitresses, countermen, busboys, service bartenders, barback, and certain sushi chefs.

The ruling covers “dual jobs,” where the understanding is that not all of the job functions that are performed by those defined as tip workers are related to tip-earning functions and the employer should not claim the tip credit for any work done by the employee that is not tip-producing work and that is performed for more than 20% of the hours worked by that employee for a workweek or for a continuous time period exceeding 30 minutes.

In the past, the actual definition of what duties fall under “dual jobs” was not clearly documented. Multiple circuit courts stated that the Department’s 80/20 guidance was difficult for employers to administer and led to confusion about what was and was not a tip-producing duty.

Taking into account commentators' input, the final rule explains that directly supporting work that is performed either in preparation of or in assistance of an employee’s tip-producing work for customers is subject to the tip credit. Examples include making coffee for the table they are serving, setting the table in their section they are serving, cutting and placing a piece of cake on a plate for another table they are serving, all of which falls under the rule and for which the employer can take the tip credit, not needing to count any of this toward the 20%.

However, if the employee fills the salt and pepper shakers at the end of the shift or carries and puts away dishes, and these tasks are done for more than 20% of their work time for the week, the employer needs to pay the tipped employee direct cash wages equal to the minimum wage for that time.

What Do You Need to Do?

The changes to the 80/20 rule could increase your costs. To minimize that impact if and where you can, conduct an audit to better understand who’s performing which duties what and how long each of those responsibilities takes. From there, determine if adjusting job scopes and roles is appropriate—and make the changes that will be best for your business and your employees.

Once you’ve established that, you’ll want to introduce and maintain strong timekeeping rigor—for you and your employees. This will help you stay compliant and help you see if and where future adjustments need to be made to reduce the monetary impact on your business. As the employer, you’ll also need to be especially diligent with scheduling and work classification. Not doing so could result in exposing yourself to a higher risk of collective action for unpaid and underpaid wages.

And while all of these changes may be driven by the law, there is definitely a silver lining for your bottom line: the processes you’re putting into motion will help you better understand your business and may create efficiencies you didn’t know were possible.

Workstream is a hiring platform that helps employers get 4x the number of qualified applicants. The world's most trusted brands use Workstream to optimize job board postings, automate screening and interview scheduling, communicate via text message, and streamline the onboarding/training process. See what all the buzz is about by scheduling a demo or email us info@workstream.is!